I am drawn to things that are exotic, rich in quality, and have complexity of design. I have always been interested in the arts of eastern and middle eastern countries; ethnic clothing, costumes, and ecclesiastical garments.

In my drawings, my aim is to come up with complex imagery of a ceremonial robe of unidentifiable origin. I want the viewer to find something of interest in every part, and to come back time and again to find something new. The drawing is the most important part of my work. When finished I put it on the wall for a month or two giving me time to refine it, and to think about color combinations. This time is needed as changes cannot be made once I have committed the design to clay.

The process of going from a drawing to a finished ceramic robe is long and laborious. To achieve the results I want, there are many tedious steps which are very time consuming, and which have to be highly controlled. Many things can go wrong, as there are always uncontrollable, and unknown issues which come with working in clay. You are then faced with the risk involved in giving over your work to the heat of the kiln. This is especially so in the brutal Raku process, which requires pulling pieces out of a red hot kiln and plunging them into a container with combustible materials.  The results can take your breath away, or break your heart. However, in the end, the two or three month journey from a bag of clay to a finished robe is worth all of the effort. 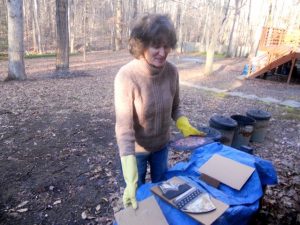